Happy Halloween from the Knotty Cat 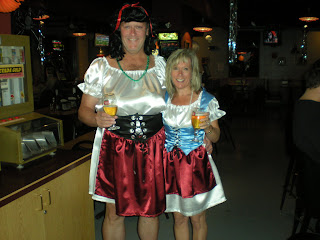 This is the first year we haven't dressed up for Halloween so I'll post last years picture. I made our costumes and I'm glad Hans is such a good sport.

He became Helga the German Barmaid and was quite a hit.


I've decided to start calling ourselves Dumb and Dumber. We jumped into the Intracoastal yesterday and never really gave a lot of thought to the bridges and I didn't even realize we had a lock to negotiate.


Luckily the lock only dropped 8 inches which was a relief because we went through a lock in Pittsburgh (while on a friend's motor boat) and it had about an 8-10 foot drop. I was just worried that our dock lines wouldn't be long enough to reach up and back down.

Since the bridges stop operating at 7 PM we realized we'd better figure out where we were going to stop for the night as you don't just drop anchor in the middle on the waterway. We lucked out and found one spot available just before the Great Bridge and with the help of the captains of the boats we'd be squeezing in between, Hans did his usual good job of parallel parking.


I know people raft up in these areas if they have to but I'm not a 'rafting up' kind of person.


One couple is from England and they've sailed all over the world and have also been up and down the Intracoastal several times. I'm very glad we talked to them because they warned us not to cross Albemarle Sound if the forecast isn't favorable. I looked in our Cruising Guide and it says that the Albemarle can really beat you up and not to enter it if the winds are over 20 knots. I could feel my chest constrict and was almost in tears and I told Hans I couldn't take another trip like we had the other night and to not even think about sailing in it if the conditions aren't right.

Just in case you think we're wimps, we've heard all kinds of talk about how awful the Chesapeake was the other night and the Englishman said he too was surprised at the 3-5 foot seas. 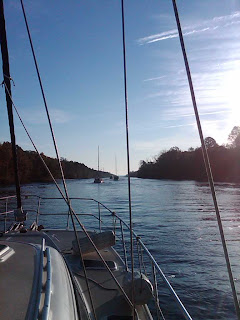 I left my camera charger at the apartment (Dumb!) and now have to rely on Hans' Blackberry. It actually takes pretty nice pictures.

This isn't the best shot but anyway you can see us as we all follow each other.

I feel just like a pioneer on a wagon train but instead of heading west and slapping at Indians with my sunbonnet, we're heading south where you fight off today's savages by throwing packs of cigarettes at them.
I don't expect to be running into any pirates though even though some people, whom we've talked to about our trip, think that every body of water is teeming with them. 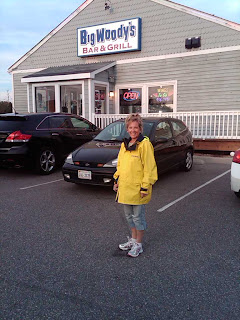 After tying up at the Great Bridge we walked to a local bar for a beer. We like to support the local economy. 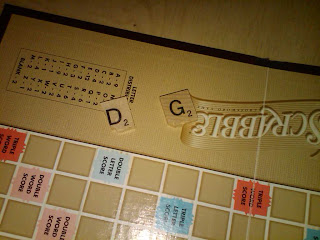 Wilbur may not be with us but he did leave us a reminder from the last trip so we wouldn't forget him.
We decided to play Scrabble last night (with no shore power we have to conserve our batteries so we turn on one light and pile on the blankets), and when I dug out the tiles I found these.
At first we thought they had a weak spot and just split but each one has been nibbled and there are tiny little Wilbur teeth marks on them. We don't have mice or the box would have shown signs of them.
But honestly! Notice that he chewed the D and G! There are tons of E's, A's, T's, etc... so how did he happen to pick such uncommon letters? Because he's smart that's why, and I'm sure he was zeroing in on the O when he was interrupted. 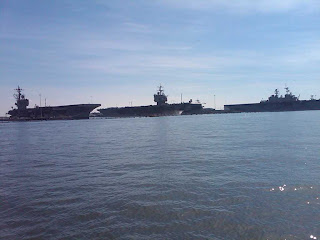 Hans was mesmerized by the Aircraft Carriers in Norfolk and he took this picture.
He'll be happy to see that I've posted it for him.

We left the Great Bridge at 8 AM this morning and will finish in Coinjock this afternoon. Coinjock is the last stop before the Albemarle and so far it appears the weather for tomorrow should be favorable for us to cross.
We'll see.
Posted by Laura and Hans at 9:57 AM