Leave the Slip, Have an Adventure

In October we removed our air conditioners but it wasn't until mid-November that we finally took the Knotty Cat for a spin. We hadn't had her out since our week long cruise way back at the end of May. Once we decided to head on out we realized we had a hell of a lot of clean up work to do since we've basically allowed ourselves to become a cluttered house on the water. We weeded out some junk including a pile of clothes I haven't worn in three years, horribly torn jeans Hans hasn't worn in three years, plastic party trays, plastic champagne glasses... We also unloaded all our air conditioners on Craigs List (if I could only find a way to get Hans to let go of his hockey equipment which currently takes up nearly all of our dock box space), as there is nowhere on the boat to store these once we start cruising again. We then directed our attention to all the crap sitting around the inside of the boat that had the potential of becoming dangerous projectiles should we get waked by clueless powerboats zooming past us in narrow channels or while we are at anchor.

For me, it was almost like learning to walk again. I did manage to get the boat out of the slip without a problem but it took awhile for me to remember all the particulars about our batteries, solar panels, etc... Wilbur was equally puzzled and he literally trembled for the first couple of hours which resulted in me stuffing him into his winter coat. 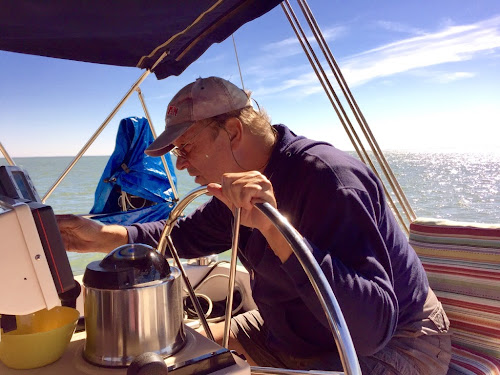 Huh? What's that? It's been awhile since we've used the Chartplotter.

And even though we were only out for three days and hardly more than a few miles from home we still had to have one small adventure. Once we entered the gulf we put up both our main and jib and then wondered why with a decent wind we were only going about four and a half knots. Hans kept mentioning this issue but since I don't care how fast/slow the Knotty Cat sails and anyway I was in the middle of reading The Caine Mutiny, I just kept saying "Uh-huh, Uh-huh," everytime he brought it up. We must have been sailing for a few hours when I stood up, stretched, looked back toward the stern, and thought I saw something following in our wake. Hans happened to look back at about the same time and asked, "What the hell is that?"

About thirty or so feet behind us (the same distance we trail our fishing lines) we noticed something breaking just under the surface. But as we continued to watch, it would disappear, reappear, and then disappear again. Hans thought maybe we'd snagged something which therefore explained our sluggish progress while I dismissed that idea as wishful thinking. And then all of a sudden 'it' was back. Something for sure was trailing us, and I, with my Creature from the Black Lagoon imagination, nearly had a fit. Whatever it was, it never quite broke the surface but as we continued to watch, we could see a big dark scary presence under the surface. Completely abandoning the Caine Mutiny (after all, they only had to deal with an insane captain and a typhoon) I couldn't take my eyes off our predator.

Hans was positive we'd snagged a crab trap and had been dragging it for hours. Somehow, I was elected to climb down the stern platform with a boat hook in order to swipe at the water behind us in hopes that I'd snag whatever monster might be trailing us. This job wasn't made any easier due to the fact that we'd lashed our dinghy (on its side) flush to our stern thus using up any really good foot holds.

Once in place, I hung on tightly to a back stay and made some very ineffectual stabs at the water with the hook. I told Hans to please steer the boat more into the wind so we'd slow down (we had continued to sail and didn't start the engines in case a crab line might be wrapped around a propellor), and then all of a sudden (and definitely without any help from me) a crab float popped up right beside me and quick as a wink it disappeared behind us most likely in search of the next hapless sailor to stumble upon it.

While I struggled to climb back up into the boat (oh, what fun it is to grind my bare knees on the deck while I try to crawl past our dinghy, Hans was joyfully calling out our new speed which was a good two knots faster than we'd been moving all day.

And on that cheerful note we sailed back into Boca Ciega Bay and anchored for the night. 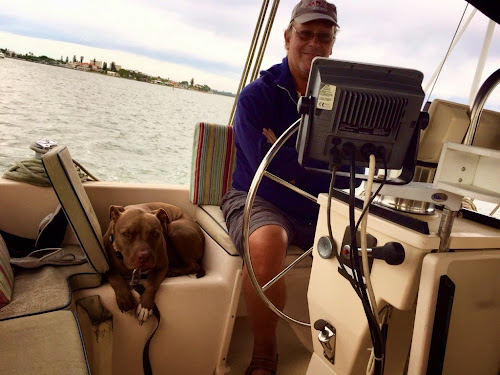 We could grow roots in a marina for months (which we do) and Wilbur never bothers to sit here. However, as soon as we move he flips up that seat and squishes himself into that small space. This is where he spent the first few months of his life over 4 years ago and it means 'comfort' to him. 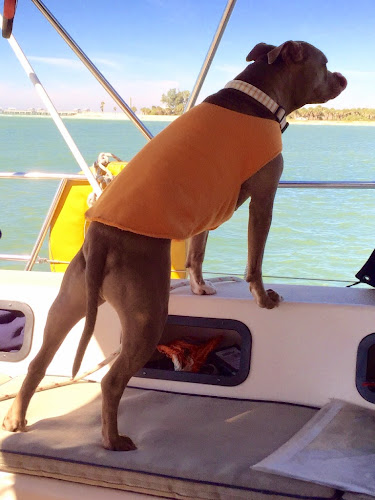 Wilbur had been fast asleep until we sailed past DeSoto Beach. And for those of you who aren't in the know; it's a doggy beach. Check out his nose, it nearly quivered off his face. 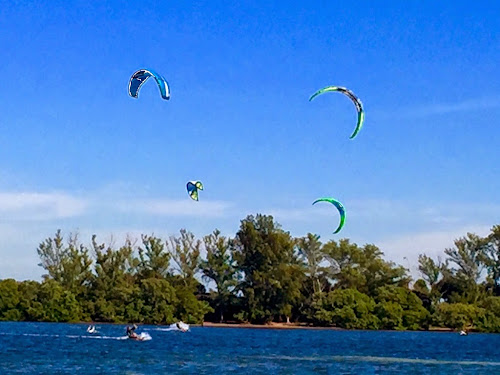 Kite surfing? Kite boarding? I don't feel like looking it up, but we sailed past a ton of them. 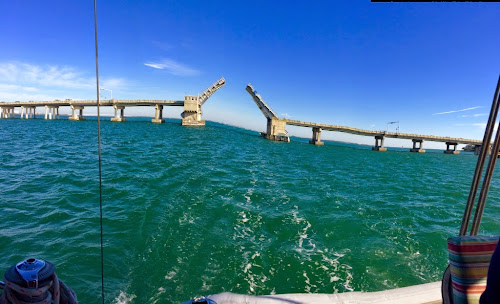 Messing around with the panorama setting on my phone. This was after we'd gone under that bridge.

Thanksgiving is quickly approaching and we'd love to spend it at anchor like we did two years ago (last year the weather was miserable and we didn't get out), but in the end it really doesn't matter; we're just thankful that we can celebrate the holiday together as a happy fambly.

Posted with Blogsy
Posted by Laura and Hans at 8:19 PM No comments: