And shame on me for skewing the lyrics to the Carpenter's 1971 hit. What's really sad is I remember when that song came out!

I had huge plans this past Tuesday which included hanging our laundry on my 'solar dryer' (fancy phrase for red neck clothes line), scrubbing both heads from top to bottom, washing the galley floor, clearing all of our junk from our salon shelves in order to dust and rearrange said junk, and vacuum.

But I knew I was in trouble on Tuesday morning when I was awakened by raindrops hitting me in the face from our overhead hatch.  And since rain to me means closed hatches and high humidity where nothing will ever dry, I figured my day was pretty much screwed. Things got worse when I discovered we were now down to one washing machine (still waiting for that pesky repairman) which required my walking all the way around the marina (in the rain) times two and why I bother with an umbrella I'll never know.
I believe the last good hair day I had may have been back in 2011.

But remember, this is Florida, and by noon the rain had stopped which put a damper on my backup plan of eating Bon-Bons and drinking a pitcher of Wilbur Wow Wows while watching old movies on TCM.

In between laundry runs I lathered our heads in Dawn detergent and then blasted them with the garden hose that I dragged down through the cockpit door.
I love hearing the bilge pumps do their thing.
I only wish I could hear them after cleaning the galley floor, but unfortunately there is no drain there.  Instead, I have to push tons of soapy water into a shallow reservoir (known as the dust pan) in the center of the floor and then sponge and sponge and sponge soapy water into a bucket. I wish there was a better way but I've yet to discover one.

So anyway, even though I got a late start to my day and didn't have time to attack the salon shelves I'll tackle those another time.

We're also in the middle of repairing some damage to the Knotty Cat's gel-coat.

At least my sewing machine is.

My last post dealt with cleaning and re-hemming our shower curtains. And while I love sewing, I hate the whole 'hauling the machine and all of its accessories out in the morning only to have to put them away again in the afternoon' let alone dealing with the heat from my iron. But thankfully with this cooler weather the iron hasn't been the issue it is during the summer.

This January a very good friend of mine became a grandmother for the first time.
And it was a girl!
I realize not everyone wants to see everything I made but I will show you the items Wilbur begged to model.

Slightly gross boat stuff that just needs to go away.

If I had any shame or pride this post would never be written.  However, anyone who knows me knows that my life is basically an open (if somewhat boring) book and I never seem to know when to keep my big mouth shut.

So, this brings me to our two shower curtains.

These curtains are original to the Knotty Cat (circa 1995) and even though I don't think they got a lot of use before we acquired her, the hems were in a bit of a grubby condition.  The first thing I discovered was that the curtains couldn't be removed in an ordinary way like those in an apartment or a house.
Believe me, I've tried.
But, I had no desire to rip down the caulked track on the ceiling that holds the curtains in place, and that's the only way they can be physically taken down. I'm not kidding.
I tried soaking the hems, as is, in bleach etc... but they still looked like crap and I finally gave up and tried not to look at them.
But they continued to prey on my mind.


I feel like I should get a Home-Ec-Gold-Star-Blue-Ribbon Reward for my day but then I remember that back in the day this is what women used to do on a regular basis.

Oh, what the hell, I still want that award!!

Observations I'd prefer not to hear (or say) while on a boat. 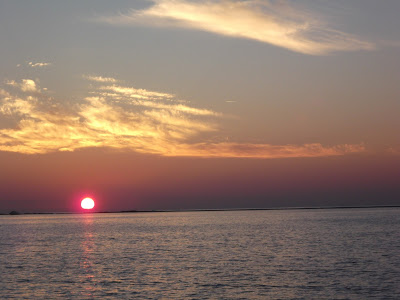 What's that smell (and smoke is a tiny bit more important than the head)?

Where the hell is all that water coming from?

Why is all that smoke pouring out of the exhaust (or in our case two exhausts)?

Why are my feet wet?

Why does the bilge pump keep going off?

Hey! What happened to the water pressure (especially bad if one has a head full of shampoo lather)?

Have you seen the dog (or cat)?

Did you feel that bump?

These comments are bad enough to hear in a slip but while at anchor they become a lot more ominous.

So anyway, this past weekend we headed out into the Gulf where we hoped to do some fishing and sailing. We put up the main and the jib, threw out two fishing lines, sat back ... and watched all the wind die.  We were literally sailing at 0 knots and our fishing lines sank to the bottom.  So we started up the port engine in order to create a little of our own wind and contemplated calling it a day when all of a sudden the wind kicked in and we actually ended up sailing very nicely for a couple of hours.
We didn't catch any fish but, you can't have everything.

We decided to anchor in Gulfport for the night.  However, we ended up at the far end of the anchorage where we normally don't go and within close sight of a sunken sailboat with its mast sticking out of the water at a drunken angle. Hans dropped the anchor and while sitting at the helm I could feel it dig in.  After backing down on it and seeing that we were going nowhere we settled in for the night.
It was around eleven PM while we were playing Scrabble when I heard a weird sound.

"What was that noise (yet one more scary observation you don't want to hear at anchor)?"  I asked Hans.  "It sounded like a 'twang'."

We then went through a ritual that we seem to always go through while at anchor.  Hans went into the cockpit and declared he was sure we were closer to another boat than we should be. I continued to review my Scrabble letters in an attempt to come up with yet one more brilliant move that involved the letter Q, so in addition to my staying put I assured him the Knotty Cat was too.  A couple of more of his,  "I think we're closer comments," made me heave myself up off my butt to take a look for myself.
"We're fine,"  I said just as we whizzed past a well lit trawler.

Before we knew it, we had both engines going and with Hans at the bow and me at the helm we got the anchor up lickety split, moved away from the sunken hulk, and re-anchored. It wasn't until we were down below again that we realized how well we had worked together considering the circumstances and tried not to think about what would have happened had we been asleep. Hopefully one of us would have awakened at the twanging noise I heard but you never know.

Now, Gulfport is a great anchorage but I have a funny feeling we were maybe hooked up to some debris from the sunken boat and after swinging on the hook in some pretty steady wind we finally broke free. We've never had a 'drag' alarm that so many people have talked about because we'd heard that they go off if you swing around a lot, but I understand there is an App available that takes that into consideration so I'm going to check it out.

As for the Scrabble game, just as we were going to bed I tossed my lap blanket towards the settee and it hit the game board instead and sent all our tiles flying. I think everyone in the marina should be grateful they didn't have to 'hear' me because you see, I was ahead in the game and I never did get to use that damn letter Q.