I guess if you're not peeing on it you may as well sleep on it. Multi-tasking or just being a stinker, I'm not sure.

I know there are some people who move north to south and then south to north via the ICW every year. But how or why they do it is beyond me. To me, it's just a slog of a run and I don't think the Knotty Cat cares for it either. 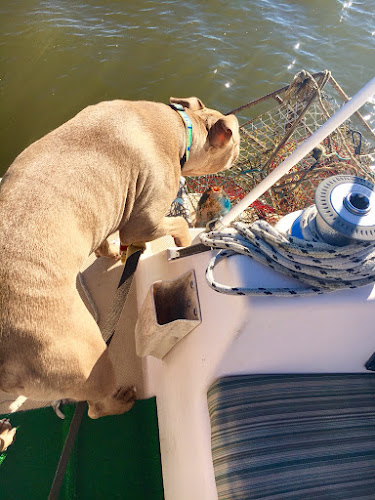 Crab trap. It was caught in our rudder and we dragged this sucker for over 30 miles. After Wilbur gave it a thorough inspection we dumped it (full of sea sick crabs I might add) beside a bunch of other pots.

I told Hans we need to get a list going of all the things we really need to have looked at once we get settled in our new 'home'.

Right out of the chute our electric anchor windlass died. I admit we were a bit smug (just short of tongue sticking outing neener neener neener kind of smug) about having an electric windlass and now we don't. Actually we do; it's name is Hans. Of course Hans had to bruise his ribs trying to repair it but for now we've rigged up a bit of a system. When it's time to bring up the anchor, I'm at the helm keeping the boat over the chain as Hans hauls it up and then using a halyard (that's at the ready) he clips it to the last of the chain and winches the anchor up. Our very first night at anchor during our trip north involved a lot of wind and current and we were very happy to find this maneuver worked. So far so good.

But we would still like to have it in working order. 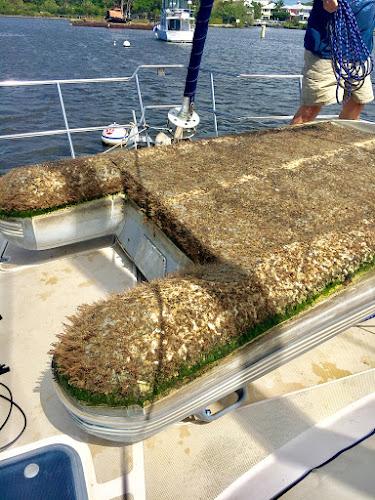 A sod farm? No, it's our dinghy after being in the water for three months.

We've discovered the starboard engine does not like to start unless the port engine is already fired up.

The day after we each took showers in our respective heads Hans found the port side engine room was covered in droplets of fresh water. By process of elimination we found that the shower pump hose fitting has broken free of the hull and when you run the shower pump it gushes soapy water all over the engine. No problem, we said, we can shower over on the starboard side. Except for some reason the starboard shower pump vibrates like crazy but doesn't pump. Shower water now gets scooped up with a bucket and dumped into the potties which really isn't such a bad thing.

Our charger/inverter still charges our batteries while underway but the inverter (that had an expensive peek from an electrician two years ago) still refuses to invert which means the outlets do not work unless we have shore power or the Honda 2000 is fired up. We have but one 12v plug that allows us to charge our phones while underway (Hans uses the iSailor app on his iPhone) but add two guests each with their own phones to the mix and things become interesting.

Our water pump has become testy lately and it's not unusual for me, in the middle of brushing my teeth, to go over to the port side engine room, reach in, and poke the damn thing with a ruler. By golly she jumps to attention then. Luckily she lasted this trip. We have a spare pump but who knows where the hell it is. Probably in the forward locker that we have the dinghy lying upside down and lashed on. On the positive side, six years ago something like this would have had me in hysterics.

We were excited to depart Florida and transited Georgia (with her wicked 8 foot tides) with no mishaps. We forgot how much coastline South Carolina has and unfortunately the tides and currents were still very strong. As we sat in our little anchorages it appeared that every six hours someone pulled the plug on our tub, very nearly leaving us high and dry, and six hours later they turned on the faucet and added that eight feet of water right back in. We were sorry to find that the huge deer flies of Georgia had kin in South Carolina where Hans literally had blood running down his legs most days, and even more kin in North Carolina where they torture him on his daily walks with Wilbur. 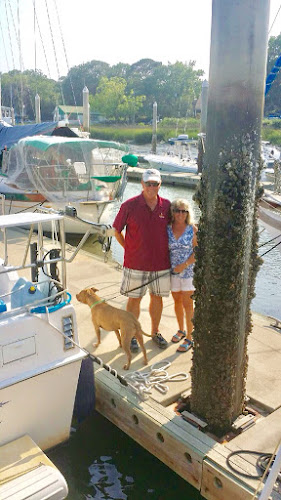 Those Georgia tides. Check out the piling with all the barnacles growing on it. This was a floating dock at low tide in Savannah. 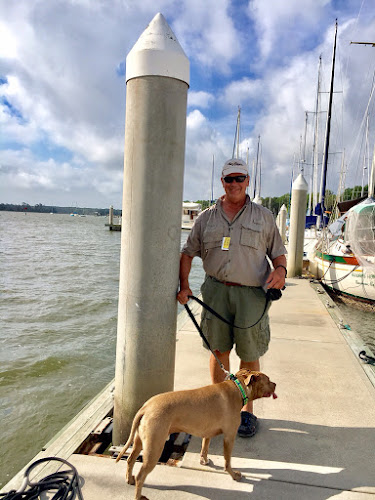 Same piling at high tide. Those barnacles are now below the dock. Creepy!

So why didn't we go 'outside' and skip the ICW? Well, we did, and it didn't go very well. The forecasts had promised such benign winds and waves, we were worried we'd have to motor instead of sail our 72 hour trip from Jacksonville, FL to hopefully North Carolina. We finally got out of the inlet into the ocean, and while it was windier than expected we were sailing nicely with our brand new main and newly repaired jib. For a while. Then the wind kicked up and the seas got all confused, stuff started flying about the salon and I got grumpy. So back into port we headed bucking waves the whole way. When we finally picked up a mooring ball amid the lovely backdrop of sunken boat masts (thanks to Hurricane Mathew 2016) sticking out of the water in Fernandina Beach, we'd gone a total of 31 miles (we'd've gone a lot farther if we'd just stuck to the ICW). And might I add, that in this protected area the wind was whistling around us at 30 plus knots.

We had two friends come along as crew for this 'outside jaunt that didn't quite happen' but the upside is at least they were on the water, and instead of puking for two days I was able to cook breakfast, lunch, and dinner.

As for things that need to be fixed; at our very last anchorage before arriving at our new home, Hans was in the process of asking me if I'd looked up at the radar mount lately when I handed him a bolt that I'd picked up from the foredeck. Another trip up the mast for me is now in order. While the starboard side of the mount appears to be in order there is but one bolt remaining on the port side. 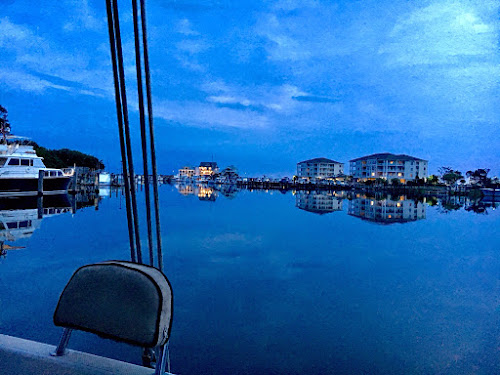 This time around I made note of each anchorage and marina we used and I intend to add a page to our blog for reference.

Posted with Blogsy
Posted by Laura and Hans at 10:25 PM No comments: