So long, Isaac, it was nice not knowing you.

Since Isaac decided not to show up at our party we're finally getting back to normal here at our marina.

Actually, I think Isaac realized he couldn't compete with the Ryder trucks full of barrels of human urine and feces (can you imagine volunteering for that job) that the protesters of the Republican National Convention were bringing into our state, and decided to veer off toward poor old Louisiana. I sincerely hope Isaac doesn't cause a lot of damage there.

Hans worked from the boat yesterday and without air conditioning (we were still in defensive mode and didn't want to put our huge air conditioner back in place just in case it would need to come down again), it wasn't very pleasant.  There was a decent breeze going on which would have been okay except it would start raining and we'd have to close the hatches. The boat would heat up, it would stop raining, we'd open the hatches...aahhhhh, more fresh air.
It felt so good.
And then WHAM.
Rain.
We opened and closed hatches all stinking day long.

Early in the day I made the huge mistake of thinking I'd do some very much needed inside boat cleaning. After all there was all that fresh air blowing in. Then of course it started to rain. First of all, I don't do well in heat.  I grew up in snow belt country and this much I know; you can always bundle up and stay warm when it's cold. But if you don't have air conditioning in Florida during the summer, with over 80 percent humidity--you're going to sweat like a whore in church and most likely be cranky.
I grew cranky quite quickly (yes, I meant to say that), and I'm pretty sure Hans wished he'd gone into the office.
By the time I was done sponging up all the soapy water full of Wilbur hair from the floors of our galley, heads,berths etc..., I could have wrung a bucketful of sweat and tears from my shirt alone. The only thing that got me through the torture of my own personal sauna was the promise that even if it was raining, I was going to go for a swim.  But when that time came, the rain and wind had kicked up to such a degree that it just didn't make sense and I swear there were white caps in the pool. I could go on ad nauseum, but I'm sure you get the picture. I ended up taking a shower on the boat and I was a sweaty mess before I could even dry off.

Hurricane Isaac, where are you??!!


Thanks to all the hype about Hurricane Isaac, we're completely stripped down and naked.  But the question of the day is, 'Where the hell is Isaac anyway?'
We usually sleep in on the weekend but today we were up early in order to batten down the hatches.  I decided to add a load of laundry to my ice run/Kravitz trip as I'd really hate to go down in a storm without clean undies.  During these sojourns I noticed a newcomer had arrived. It was a sail boat that had taken quite a beating at a neighboring marina and the owner decided we offered a bit more protection.  His very new bow sprit was demolished and his jib hangs oddly. But when he left today with a casual, "See you later,"  we couldn't help but notice he'd tossed out but one lonely little fender and his jib is still hanging by a thread.
The polar opposite is the boat next to him. This particular cruiser is usually full of banter and always joking but yesterday he was a bit grim as he literally tore his boat apart and announced that we were sure to be evacuated and he wasn't waiting around for it.

I have to tell you that gave me a little pause.

A huge cabin cruiser that resides at the far end on the sea wall left yesterday morning with a boat full of party goers. As they ran the gauntlet of those of us choosing to remain, they shouted out that they were going out to meet Isaac (Ha Ha) and we were all left wondering just what was really going on. They never did come back and word has it that they were going somewhere else in order to get hauled out because during Tropical Storm Debby they'd been bashed against the wall far too much for comfort. At least that's what they said. I have to kinda wonder if they didn't appreciate the fact that Wilbur chose to take a huge dump right beside their boat (in the grass and anyway Wilbur has been pooping there long before they ever brought their boat in here) during one of their on board parties which included a lot of snotty teenage girls.

Across the way, the boat with the hurricane ready tarps got ship shape very quickly after a severe tongue lashing from the marina owner and by noon or so we were all ready for Isaac.
Sally (from Blue Moose) and I decided to take advantage of whatever nice weather we had remaining and headed for the pool but then Hans showed up and announced that it had started raining in Pass-a-grille. I got out, took a good long shower in the bath house and washed my hair.
Once back on our boat we awaited the big blow.
We ate Publix fried chicken.
I had two Wilbur Wow Wows and worked on a crossword puzzle.
The rain stopped.
The sun came out.
The boat got hot (we now have no air conditioning).
I got pissed.
The radar showed that we were currently being slammed with a huge amount of rain.
We were bone dry.
I went back to the pool.
An hour and many laps later it started spitting rain.
We went back to the boat, again.
The rain stopped.
Sally and Brian, and another couple we know stopped by for an impromptu cocktail party and with the same question on their minds.
Where the hell is Isaac?
I've finally figured out that Isaac is a blow hard.  He's the 'Party on Down Dude' who's really just full of his own hot air.  He's the 'Big Man on Campus' and after assuring all us low life hangers on that he'll be showing up at our party, has really just chickened out.

We were so desperate for entertainment during our Getting Schnockered While Waiting for Isaac Soiree we actually stopped talking long enough to watch a fellow livaboard across the way get on her boat.  I'm ashamed (not really) to admit that we all hoped for a repeat performance on her part where she takes a misstep and falls into the water.
This would have been spill number five but alas it wasn't to be.

I was so hoping hurricane season would end this year without us becoming directly involved with one. But I guess that's not going to happen. We were surprised at the force Tropical Storm Debby exerted and I have a  funny feeling that Isaac scored himself some steroids and intends on showing us exactly how a proper storm should behave. Poor old future storm Joyce started forming right behind Isaac but when he started roaring and pounding his chest Joyce grew depressed, lost her momentum, and headed north out to sea.

Today we were kept busy readying our Knotty Cat for what's sure to be a hell of a blow.  We took down the Home Depot patio curtains that we had draped over the boat in order to provide a bit more sun protection, re-secured our dinghy which is currently upside down on our bow, and bought some washing machine hose to put on our dock lines for chafe protection. Tomorrow we'll take down the bimini and dodger (which we did not do during Debby because we didn't know she'd hang around so long), lug our air condition down below before tons of rain sneak around its horribly inefficient tarp, and move our car to higher ground.  Oh yeah, I also emptied our dock box. You might recall that during Debby our dock box was flooded and all of Hans' hockey gear got soaked.  His gear is now in plastic bags and stacked in the car.

Since we're relatively new to this whole live aboard life (it's been just one year this month) I found myself Kravitzing around a bit more than usual as I was curious to see how other people in the marina were preparing for Isaac. I expected to find everyone in a panic and braced myself for the most dire of predictions (kind of like the cruiser's forum in real time) and I was almost disappointed to find that everyone was pretty calm.
Today we all looked like a bunch of worker ants; tarps, biminis, dodgers, jibs, a lot of main sails, cushions, potted plants, dinghies, etc... have been removed.  We didn't remove our jib but wrapped the jib sheets around it a couple of more times and we have an in-boom furled main so it too was left alone.
By coincidence our marina's palm trees got trimmed this week and now with everyone's boats getting stripped down we resemble a poor depression kid with bad summer buzz cut.  Hans thinks everything looks clean and neat.

During my ice run/Kravitz trip this morning I came upon a sight that both horrified and delighted me, and I knew I had to go get my camera. I immediately made a pit stop at The Blue Moose and told Sally (the better half of that live aboard team {sorry Brian}) what I'd seen. Of course she wanted to go with me and after dumping the ice in our cooler I informed a pouting Hans that he could most certainly start taking down our many layers of curtains without me since a photo-op was awaiting me.

Look at this (and while I took tons of pictures these ones turned out best). 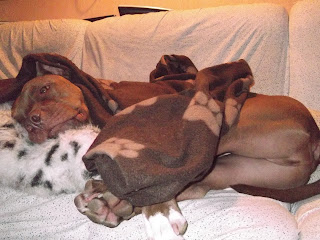 Wilbur is not looking forward to having his schedule upset and as far as he's concerned Isaac can kiss his very cute butt.