So where’d I leave off ALMOST A YEAR AGO?

I believe we’d just arrived in North Carolina and it was time to give the Knotty Cat a thorough going over. And by golly she got one.
Luckily, we’re in an area with a lot of boat services available to us and we put them to good use.
I may have been running around in desperate need of a haircut cut and color but as usual the Knotty Cat came first.

She now has a big honking new windlass, a new topping lift, a relay added
to the starboard engine (it now fires up slicker than snot), one new halyard, and our rigging passed inspection. Needless to say we’re on a first name basis with a lot of boat fixer upper people here.

In August we went back up north for a wedding and with the intention of being gone for a couple of weeks. Before leaving I suggested maybe we should take down the dodger and bimini and also the jib as hurricane season was approaching. Hans agreed they could come off but he wasn’t overly concerned with hurricanes since it was so early in the season. “The big ones don’t hit until later,” he assured me. And then we found ourselves having to stay way longer than planned, and Hurricanes Irma and Maria decide to arrive rudely early instead of fashionably late.

Along with the rest of the world we were stunned and stayed glued to the weather channel on TV and conjectured on just where exactly these unpredictable bitches were going to land. While our boat was in a relatively safe place (Hurricane Irene tried her best to cause trouble there in 2011 but except for flooding there was little damage), Hans really wanted to drive back down in the midst of all of it. However, we’d been warned that if water level rose up to the docks (and it did) we’d have to get off the boat. And since so many evacuees from Florida were arriving in full force we might not have found a place to stay.

Now, I’m not sure who to blame for the following; whether it was too much time on my hands while waiting out the storms, Facebook, or Zillow but we bought a house.
So, someone posted an adorable house on Facebook in the same area we have the boat. And it had a link to Zillow. This led to many more adorable and AFFORDABLE houses for sale in the area and I was hooked. By the time we finally got back to North Carolina almost all those houses had sold but they were quickly replaced with others.
Wow, what to do! Big decision here. We’re not getting any younger; when the time comes to be done with cruising will we be able find something affordable; the stock market had come out of its coma and this might be a good time to cash in some IRA money...
And then we found THE house.
We moved in at the beginning of December and made the decision to sell the Knotty Cat.
Just like that.
This is a boat that should be used. She’s perfect for the ICW with her shallow draft and 50’ mast, and also perfect for the Bahamas.
Now that she’s all fixed up, Hans remarked that we could take off on her tomorrow. Well, if she doesn’t sell by next year we might just take a cruise up the coast to New England which is where we started this journey, who knows. 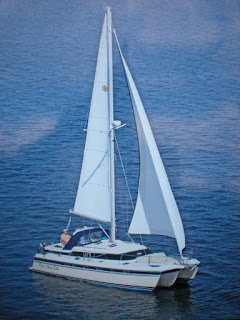 Posted by Laura and Hans at 4:23 PM No comments: