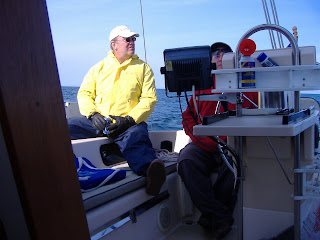 Captain Hans.
Hans learned to sail at the age of 14 while living in Toronto.  By the age of 16 he was a sailing instructor, and in 2008 he received his U S Coast Guard Captain's license.

Also in 2008 we purchased a 35 foot Bob Johnson Island Packet Cat (who, by the way, loooooves attention and I now know why boats are referred to as 'she')  and along with a rather inexperienced crew (huge understatement), sailed her from Massachusettes to Maryland.