Welcome to the Neighborhood! 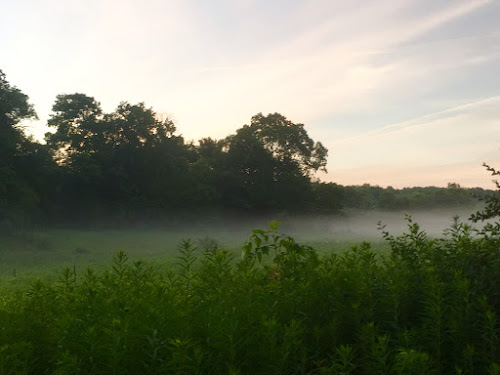 Hans and I are a little over three months into our new (and temporary) life here in the boondocks and we're getting all kinds of countrified. I've made both rhubarb and strawberry pies from scratch and I don't think any of them had the chance to cool down before they completely disappeared. And just like a pioneer I made due with a Tervis tumbler I bought at the Salvation Army for a buck that made a great rolling pin, and a disposable brownie tin I found in the stove drawer. I admit I planned on cheating with pre-made crusts but after pricing them at the local grocery I opted for good old Crisco and flour. It must be the air here because each and every crust has been a success. Blueberries are coming on now and Hans can't wait. 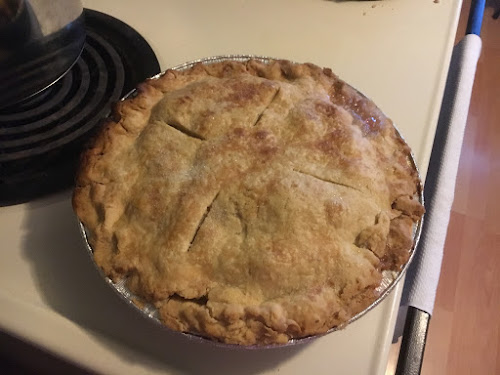 The blueberry bushes were planted in the 1920's, are never sprayed, and are behind Dear Friend and her husband's house. In true neighborly fashion we've been told as soon as they're ripe to go over and pick anytime we want. In the evening when we're not working we take turns visiting back and forth and share homemade wines and dog petting duties. While at their house I have at any given time one of three doxies on my lap. When they are at our house Wilbur spends a good bit of time trying to get into new laps but he doesn't quite pull it off. He has succeeded in a few kissing bandit attacks but they're on to him now. 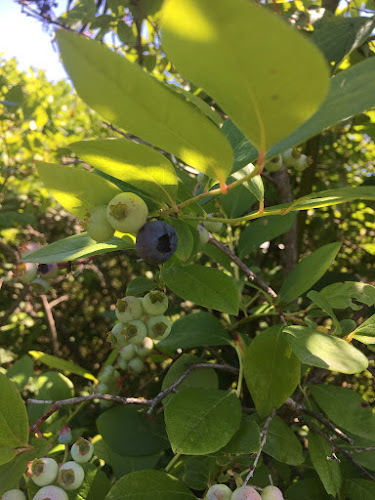 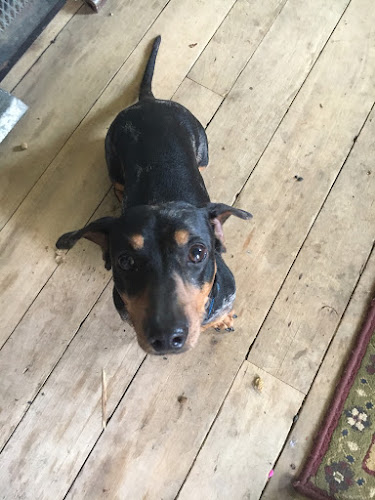 A while back Dear Friend told me she was going on an Amish Run the next day at 9 AM and I was welcome to join her. "What's an Amish Run?" Hans wanted to know, and I told him I didn't care what it was as long as it didn't involve me waiting on tables. Dear Friend fetched me bright and early the next morning and we bounced around the countryside in her pickup truck and hit three Amish scratch and dent stores. Two hours later and wearing my brand new $2.83 100% UV protected sunglasses, I breathlessly returned home with about a hundred dollars worth of groceries that cost me $43. Squished toilet paper, loose cans of club soda, chocolate truffles, pecan cookies, a massive roll of freezer paper (minus its box cover), five bags of big potato chips for 75 cents each, beans, soups, tomato sauce, jars of picante (also 75 cents each), name brand coffees, sixteen bottles of Sparkling Pellegrino for five bucks total because the plastic holding them together was torn (they sell for $5 each in restaurants), disposable pie plates (yay!), bottles of salad dressing for 15 cents... "Just don't look at the expiration dates!" I warned Hans.

I've been on two runs so far and no one including the dog has gotten sick yet.

Hans continues to play the piano at the inn on weekends. Last year after playing at brunch a family inquired if he was available to give lessons. Their daughter so wanted to learn and had a strong desire to play Jingle Bells at their church come Christmas. However, the lady they hired from their church deemed Jingle Bells and all Christmas carols to be evil. Hans, not being a religious person himself was puzzled and asked if she had been taught the scales. Well, no she hadn't as the devil apparently resided there also. So he was hired. When we left at the end of last year his pupil's audience could probably discern Jingle Bells if they were told what was being played and we were pleasantly surprised when they contacted him again this year to continue the lessons.

When I'm not working (and last week was a killer) I've found a new passion in soap making. It all started when we first moved to Florida and I stumbled into a little gift shop that had goat milk soap. As I was quite happy with my cheap Ivory Soap, I've no idea why I bought some. But I did. And I was hooked. I looked forward to getting dirty and sweaty just so I could lather up with that damn soap. I even considered driving an hour to the store to get more but found I could get some just around the corner. At $6 for a three ounce bar it wasn't really a bargain but I decided it was an affordable extravagance. And then we moved here to goat country and I had an epiphany. 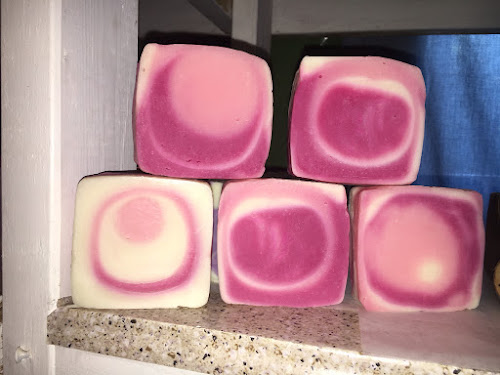 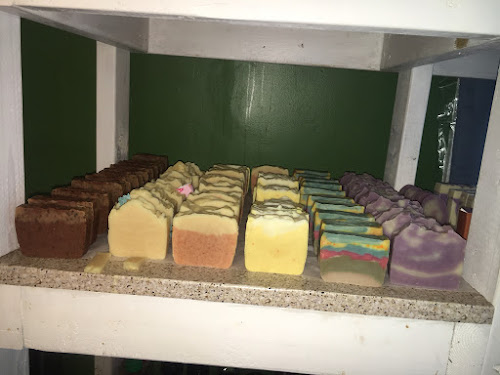 Each batch requires at least six weeks to cure. My kitchen smells heavenly!

The first hurdle in my new venture was finding and buying lye. I didn't realize that in addition to being in goat, cow, and Amish country, we were also in meth country and one of the key ingredients in meth is lye. I've been yelled at, laughed at, and winked at in every hardware store in the county. A lot of stores have quit carrying it and those that do keep it under the counter. I finally found a source but don't ask me where because I'm not telling. I also only have a very small amount on hand at any given time so don't think about breaking in and stealing it. And remember we do have a pit bull. It may only be Wilbur, but hey! he's a pit bull.

Lye, by itself, scares the bejeebers out of me. Once it's combined with oils, and water or goat milk it becomes a very innocent bar of soap, but until then... I had flashbacks to the time I attempted to clear the head (polite nautical term for toilet) hoses on our boat with muriatic acid. But my absolute love of soaping won out over my fear of blowing up the neighborhood. I'm just very careful. I had a day off from work today and decided to whip up a batch of baby soap. If people wondered about us the day they saw us outside cutting Hans' hair while he was shirtless and I was in my robe, I can't help but wonder what they thought seeing me out there today wearing a face mask, goggles, and gloves, stirring up my lye concoction while our pit bull lazed on his run.

At least we fit in and who knows, they very well may be my next customers. 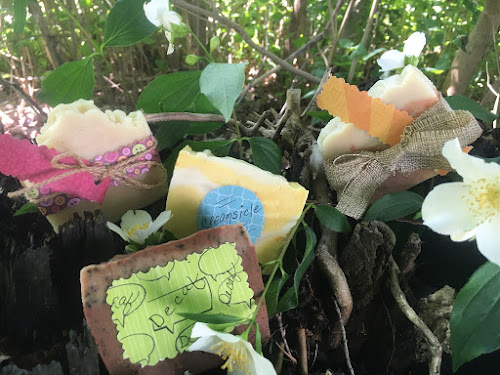 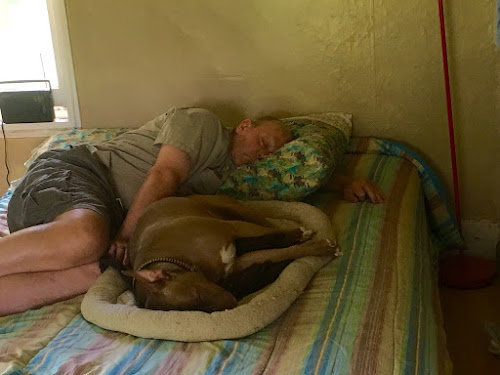 Hmmm, I was told everyone takes afternoon naps in the country.

Posted with Blogsy
Posted by Laura and Hans at 10:49 PM 4 comments: