Life Continues to be Interesting 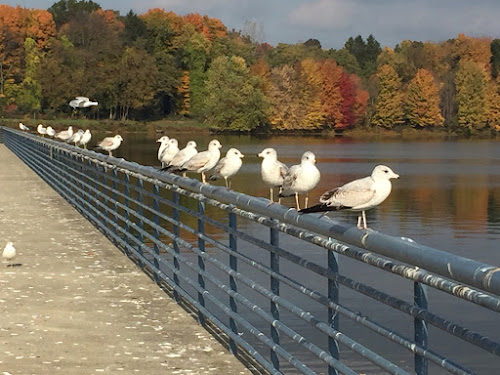 A beautiful fall day in Pennsylvania

When we put the Knotty Cat on the hard in June and came back to Pennsylvania, it was with the intention of staying a few months and then heading back to Florida (actually today marks the day we planned on being on our way). But if there's anything I've learned in my lifetime, it's that most plans are written in sand and subject to change.

Yes, our plans have changed and in a weird twist we've somehow experienced a bit of role reversal too.

For the four years we lived in a marina in Florida, Hans had a full time job while I held down the fort on our boat taking care of the dog, the laundry, the cooking, the beer management... I guess you could say we had a typical 1950's kind of lifestyle.

But even though Hans was gainfully employed, we both agreed that neither of us was getting any younger and so Hans quit his job, we went cruising, and blew through about a years worth of savings in six months. At the beginning of this year we left the St. Petersburg area and headed south. We were lucky to get to the Dry Tortuga's and Key West before jumping over to the Bahamas. We pounded across the banks to the Exumas but of course this had to be the worst weather the Bahamas had experienced in the last thirty years and because of this we failed to reach Georgetown. At the end of the day I really don't care because we ended up sitting in Blackpoint Settlement for nearly two weeks, and as far as I'm concerned, it just didn't get much better than that. Our cruising friends even named our happy hour sight, 'Wilbur Beach', after our lovable pit bull.

Unfortunately, at one point during our time in the Exumas, we were out of GPS range (no internet or phone) for nearly two weeks and upon calling home I learned that my dad had been in the hospital. When we returned to the states Hans and I decided to put our girl on the hard and 'head home' for a couple of months. And this is where it got interesting.

How to get around (we had no car), where to live (we had no house), what to live on (we had no jobs). But we forged ahead anyway. It was during a conversation with a friend from whom I'd previously purchased three Corollas (and soon ended up with my fourth) that we miraculously found a place to stay. A couple of days after arriving here I was sadly informed of the death of a former coworker. Upon attending her memorial service I met up with many of my former coworkers and they asked me if I was coming back to work with them. "Oh, no, it's thirty miles away from where we're living," I said. The following week I hit the floor, stumbling running. So just like that, we had a car (thanks to a 3% transfer fee, interest free, credit card loan), a wonderful basement apartment (you have a pit bull? No problem!), and my old waitressing job at an historic inn.

But, time was flying by quickly and then we realized that since open enrollment takes place during the month of November, Hans, being an insurance agent, couldn't possibly do his job and navigate our boat down the Intracoastal Waterway at the same time. So we said, "What the heck, let's stay through the end of the month." But then what about Christmas? This year we can't afford to turn around and fly back for just a few days and anyway that's also when things get super busy at the inn. But wait! It will also be time for us to move out of the place we're currently living. And then another miracle occurred; we were offered a place to stay in the town where I have my job and as an added bonus, Hans is the now the dining room pianist on Friday and Saturday nights! The family that works together.... (I just hope we don't have a knock-down-drag-out-fight in the middle of the dining room some evening).

The other night Hans remarked, "You got us a car, a place to live, and you've found work for both of us."

"That's okay sweetie," I said. "And after you walk the dog, be a dear and fix me a drink." 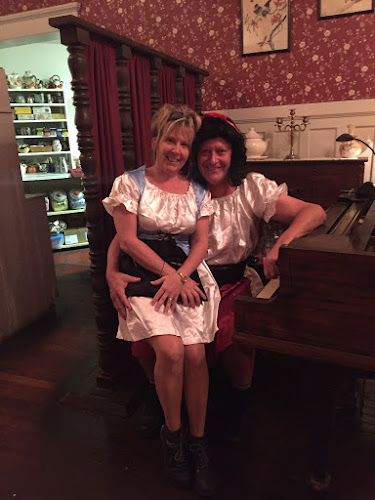 Is there nothing we won't do for a buck? 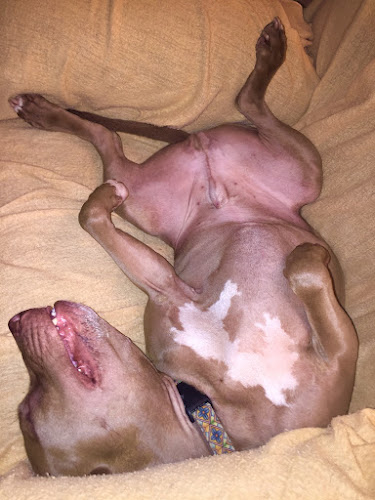 Wilbur's happy as long as he's with his fambly!

Posted with Blogsy
Posted by Laura and Hans at 9:04 PM 3 comments: