We thought we were pretty smart when we arrived here in Pennsylvania from Florida in April. Let's wait until the snow's gone, we said. Well, as everyone knows we weren't so smart since along with temps in the teens, it snowed heavily a couple of times in April. But we really weren't prepared for the snow we got on May 15th. Big fat snowflakes fell all day long but what really pissed me off was: GRASS CONTINUES TO GROW EVEN IF IT DOES SNOW!

And since between Dear Friend and us we have three mowers in various stages of disrepair, we're quickly losing the battle of the grass. Wilbur kind of likes grazing out in the yard and is quite happy to puke up frothy green stuff upon coming back inside, but Dear Friend has three little doxies who yip frantically for help when they get lost in what's sure to be a forest to them. 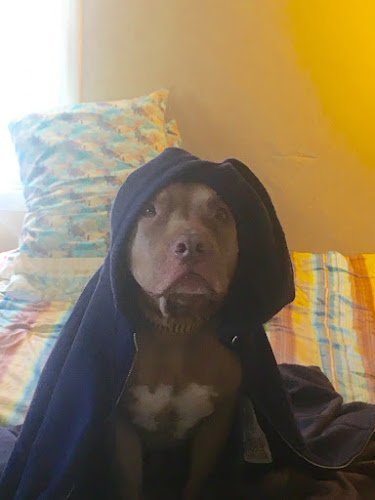 A successful attempt at staying warm and stylish at the same time. 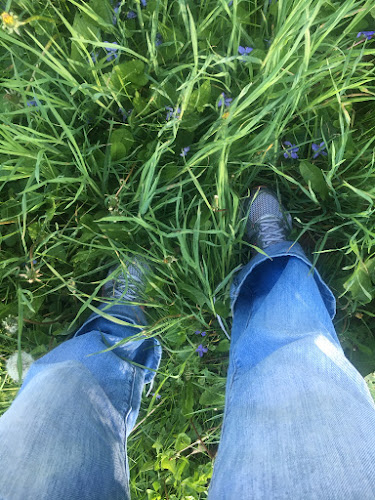 I told him to let me buy that goat.

Hans is still marveling over life here in the country. When we lived in the city, we set our garbage out on the curb and during the early morning hours a big truck would pick it up and take it to Never-Never-Land. In the Bahamas we had to store our garbage in the Knotty Cat's outside lockers for days before hitting the dumpster jackpot. But here in the country, we burn our trash. Actually, there are recycling bins at the township building just a mile or so from us so we burn very little, but, I fear I have a budding pyromaniac on my hands. The first time Hans burned the garbage (after making little scientific, kindling pyramids out of the sticks he gathered, he was a Queen Scout after all) he was astounded. Wow, Hans exclaimed. Just like that, a big bag of garbage was gone. And he still gets excited on burning day and can disappear for a whole afternoon, rearranging and poking the embers with his 'fire stick' (a huge tree branch that is not to be thrown into the pit). A better toy has yet to be invented.

And speaking of garbage, we had something strange happen the other night. Hans had put banana peels in the garbage that morning and by nightfall they just plain stunk. I knew I wouldn't be able to sleep with that smell so I grabbed the bag, tied it up, tossed it out the door, and crawled back in bed. Hans thought perhaps we should take it around the back of the house but, when I reminded him it's pitch black out there at night, outside the door it stayed. Until we got up in the morning and discovered it was gone.

Was there a garbage thief in the area we wondered. An identity theft racket? I wasn't so worried about that since the thief only got coffee grounds and those banana peels but I was creeped out knowing someone or something had been right outside our door while we slept.

It was days later on a walk with Wilbur that Hans found the bag. Way down back in an area the previous owners had used as a dump, there it was. The bag was still tied but it had been very carefully split open and our garbage was strewn all about. We're still arguing over what or who did this. I think it was a bear, Hans thinks it was a raccoon. But one thing we do know; we use a hell of a lot of paper towels.

The local mouse population still hasn't figured out I really mean business so I keep setting traps and still cringe when I hear them go off. And as frugal as I am I throw the whole shebang out as I can't bring myself to separate the little corpse, complete with accusing dead eyes, from those jaws of death. I think I'm on my third package of traps.

Somewhere along the line I believe a turf war occurred between Chip and Dale, who were residing in our bathroom exhaust vent, and a family of starlings. The screaming starlings won and now throughout the day we enjoy the shrieking of very hungry babies. Starlings sound exactly like humming, buzzing, electrical wiring, which in an old house with old wiring is oddly disconcerting.

Another conversation overheard here the other day in Hooterville:

Dear Friend (hollering from across the road): Hey, Baby doesn't have any balls!

We weren't sure we heard her correctly so she had to repeat herself a couple of times. Now everyone on the road is privy to the fact that Baby, her dachshund runt (a whopping 5 pounds at the age of 5 months), is missing his 'set'.

Hans (really getting into this country kind of living, hollered back across the road): Well, damn! Where's he supposed to go to the bathroom? 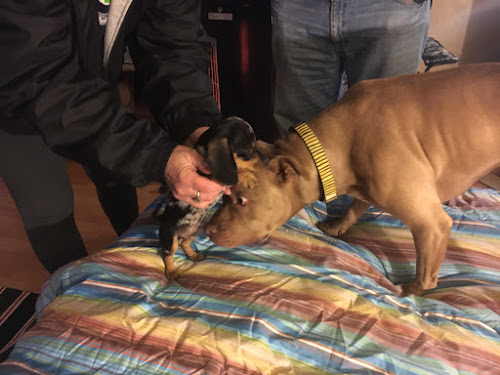 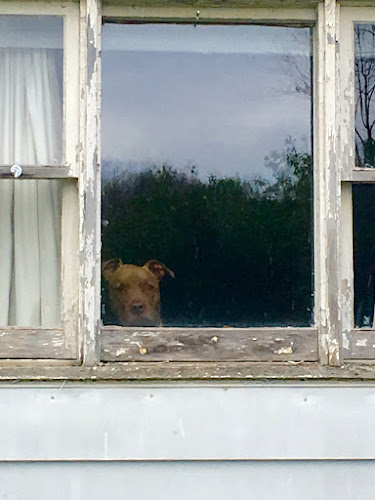 When you drive past our place this is what you see peeking out our window. All I can say is, "Guess what. Out here in the country we are bat shit crazy so just keep right on going."

Posted with Blogsy
Posted by Laura and Hans at 10:06 PM No comments: