Life at our Marina with neighbors 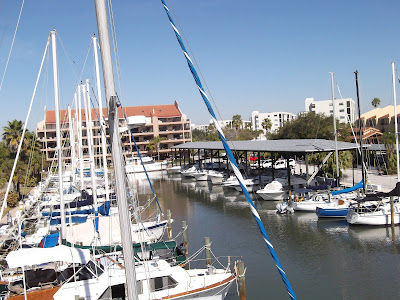 This post addresses the age old issue of 'neighbors' and I have an odd  feeling that even if I  live long enough to find myself residing in a nursing home I will still find myself living next door to a pain in the ass.
For some reason I've had far more experience in the neighbor department than most people would ever want starting way back when I was a small child and we lived next door to a mean drunk (I still have vivid memories of the night he decided to straighten a crooked bullet with a hammer). Back then we thought that calling the police would put a stop to the harassment he heaped upon us (music blasting outside our bedroom windows at 3 AM, fish, fireworks, and bricks thrown into our pool during the night, and that time he tried to run my mother down with his truck).  But at the end of the day our calls for help just seemed to add fuel to the fire and my parents put up with and suffered through the most unbelievable abuse for over 40 years until the idiot finally died.

While my parents were putting up with this continuing nonsense I got married and found myself living next door to Gladys Kravitz (these days when I take my daily walks around the marina, I tell Hans I'm going Kravitzing). Let me just say I can't imagine approaching a neighbor to announce that I didn't recognize a car that I'd seen in their driveway a day or so earlier and expect an answer, but Gladys did (too many times). And to this day it pisses me off that I actually felt the need to answer her questions.

After my divorce I moved into a new house where my retired neighbor insisted on mowing my yard even though I was thoroughly capable of mowing it myself. He ignored my protests and deep down I knew nothing good would ever come of this situation so needless to say I wasn't too terribly surprised when Mr. Good Deed turned on a huge hate campaign ten years later when I put up a For Sale sign. In his opinion I was selling out, I was in cahoots with a couple who owned the vacant lot next to me, and  I didn't give a damn about my neighbors. Honest to God, he thought a huge corporation was going to snatch up my tiny little lot and the whole neighborhood would then go to hell in a hand basket. I know this because he showed up at my work place one day and screamed at me in front of all my co workers. He also erected a barrier of sorts along the back perimeter of our properties consisting of old tree branches woven together in a makeshift fence. The reasoning behind this still puzzles me but I'm pretty sure he was hoping I'd knock it down. Of course I didn't and I still can't believe my house finally sold. I do admit I harbored a nasty desire that the new owners would park a few rusty vehicles and perhaps an odd refrigerator or two in the front yard if it would only piss off Mr. Good Deed.

Then I moved to The Big City where Hans and I lived together for a couple of years.  We really didn't know our neighbors very well but they certainly made themselves known to us thanks to the constant police presence in our neighborhood.  Never in a million years would I have thought that I would actually find myself side-stepping gun wielding policemen (more than once) upon returning to our apartment from a store run and I felt like a relic from the old west and  prayed they wouldn't shoot my purchases out of my arms before I could flee upstairs. And right before we moved away we watched as the coroner's office hauled a body out of the back yard of a house from across the street. I was more than ready to leave.

We eventually arrived on the west coast of Florida aboard our Knotty Cat and were barely settled in when my newly carved Halloween pumpkins that I had sat on top of our dock box were tossed into the water and my recently purchased potted plants stolen.


And I met one of our new neighbors, Joe.

Initially I felt sorry for Joe. Joe was upset because his girlfriend had been forbidden to set foot back in our marina 'just because the owner found her smoking in the bath house'  and could I believe someone would throw a homeless cancer survivor out into the street? But I soon discovered that the girlfriend was a nut case (and that Joe's mother is the one who didn't want her around. By the way, Joe was well into his 50's) who though supposedly homeless was able to afford a cell phone and cigarettes and enjoyed stealing Joe's vehicle on a regular basis including Thanksgiving morning. The girlfriend continued to visit Joe and they would have hugely loud fights and would then be stunned when the police showed up.
Every single time.
Then there was the morning the young couple who lived next to Joe discovered him in their cockpit with his arm deep in their beer cooler. Upon being caught 'red handed' Joe played the fool. "Oh my God! This isn't my boat? How embarrassing! I can't believe I did this! But anyway, I'm out of beer so do you mind if I take one?"  It wasn't until a few months after he'd been evicted that another live aboard couple realized that Joe was most likely the culprit who'd stolen all but one bottle of beer from a case they'd left on ice in their cockpit.


But, my relief of finally having gotten rid of Joe didn't last long when he was replaced by a whole new neighbor.

A neighbor who felt the need to hail us at 11 PM, far too often, in order to impart some valuable piece of information upon us such as how many knots the wind was going to blow during the night. I finally learned to quickly close our cock pit door as soon as I smelled the cigarette smoke that always preceded another unwanted visit from Neighbor.

Neighbor thought he knew much more about 'boat stuff' than we did and succeeded in completely screwing everything up the second time Hans sent me up the mast. It was a Saturday morning and we finally had the proper bulb and o-ring for our steaming light (or so we thought), and a new bolt for our radar.


Up the mast I went and out came Neighbor full to the brim with commentary.


Now, I'm terrified of heights and Hans being aware of this was very carefully hoisting me up the mast  manually as opposed to using our electric halyard since he knows this gives me an odd sense of control. This was more than Neighbor could handle and he fairly danced about his boat with impatience and shouted instructions to both of us. Hans assured him that this was a simple routine for us and that we were just tying up some loose ends and then did his best to ignore Neighbor.
Then I discovered the replacement bulb for the steamer light was too small and the o-ring too big. And the bolt we'd bought to replace the missing one on our radar was the wrong size too. I shouted this information down to Hans and we decided we may as well give a bigger bulb we'd found on board a try. But since I was already up the mast and didn't feel like coming back down only to go up once again we were debating on how to get that particular bulb up to me.

"Oooh! oooh! I know! I know!" And then he was on our boat. While Hans tried to calmly explain what we were going to do, Neighbor kept shouting, "No, No! Listen to me! Listen to me! Shut up! You're not listening to me!" Hans had found the spare bulb and taped it to our boom so it would be within easy reach for him, and he'd tied off the halyard that was holding me in place. While Neighbor leaped and jumped about and continued to shout, the wind started puffing a bit. From my perch up above these conditions combined to cause the mast to start swinging to and fro and my heart to pound.

Me:  Would you guys hurry up and do something, I'm moving around too much and anyway I'm getting sunburned.

By now Neighbor is swinging a huge thick line like a lasso and thinks he's going to loop it over one of the spreaders.

Me: It's getting windy up here, would you guys hurry up?

Neighbor is in a frenzy of throwing and wants me to shut up.

Me (noting with great alarm): Hey, I'm sliding down the mast!

Neighbor: No you're not.

Me (still sliding): YES I AM! What the hell are you doing!

Neighbor: You're not moving.

Neighbor: Oops, I stepped on the winch handle.

And in order to step on the winch handle this meant he'd jumped up on our boom during one of his tossing efforts. This also meant that he'd somehow dislodged the bulb Hans had taped to the boom and it was now gone.
Hans cranked me back in place and told me to try the original bulb one more time.
We discovered that a tiny little bulb when dropped from a great height will shatter into more pieces than you can imagine.
I didn't bother to go back up the mast until after Neighbor was finally evicted and in only a few minutes I calmly and successfully replaced the light, the o-ring, and the bolt.


Someone recently asked me if we're enjoying the quiet these days now that Neighbor is gone and I had to admit that while I like not having to peek outside before leaving the boat anymore, it's almost boring. 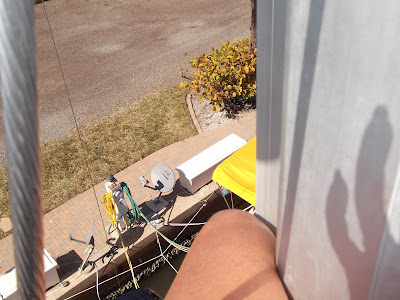 But I've no doubt new neighbors will arrive as they always do and I can get back to some serious Kravitzing.