Still hanging in the Abacos, and I'm a wuss! 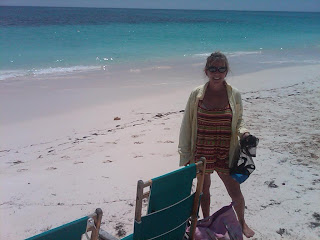 I have no idea what's happened to me but I've become a bit of a wuss! When we started out on this adventure I was so looking forward to some good-time snorkeling fun. But when I was finally presented with the perfect opportunity to engage in this oh so adventurous activity, I got cold feet which is odd as I'm not a stranger to this sport and have always enjoyed it.

The dark water that's lying behind the blue water in this picture contains perfect reefs for snorkeling and here I am clutching my snorkeling gear.

Hans couldn't get in the water fast enough and he was thrilled to report back to me about the fabulous and colorful fish he'd seen. Unfortunately, when I ventured forth (while Hans babysat Wilbur) and got close to the reefs, my crazy imagination took over and I discovered that the fact that an entirely different life form actually exists just under the surface of the water totally freaks me out. Undulating fronds and waving plants evilly beckoned me to come close, and what the hell are those formations that look way too much like a human brain, not to mention that some of those fish aren't colorful at all and are most likely relatives of the fish we snagged while trolling and have wicked revenge on their minds!

When after just a few minutes of paddling around, I awkwardly crawled out of the surf in a mild panic (BTW, there is no graceful way to enter or exit any body of water while wearing flippers!), Hans was nicer than he really needed to be (but then Hans is a nice guy) and he expressed his concern about my fear.

Things didn't improve at all when a rather beefy Barracuda showed up (why the hell is he so fat I wanted to know!) and swam parallel to the shore line for the rest of the afternoon. And no, I was NOT one of the many idiots (Hans included) who donned snorkels in order to get a glimpse of him. But Mr. 'Cuda wasn't too interested in his observers and much to everyone's disappointment, continually flitted away as soon as anyone got too close.

I hate being a spoil sport, so that evening after a couple of frou-frou drinks I told Hans that I wanted to go back the next day. And damn him, the next morning he remembered my comment and before I knew it, Wilbur was locked in our berth and we were on our way. 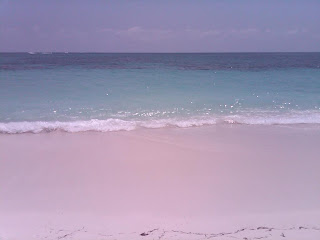 There they are! Those damn reefs!!

Well, I did it! I finally got in there (all the while clutching Hans' arm) and saw pretty purple fish, ugly white fish, and things that still looked like human brains. I also nearly hyperventilated when I observed a tree limb lying on the ocean floor and thought it was Mr. 'Cuda!

I'm very much hoping that I continue to lose my fear over his whole snorkeling thing and don't ruin Hans' time here in the Bahamas.
Posted by Laura and Hans at 8:31 PM