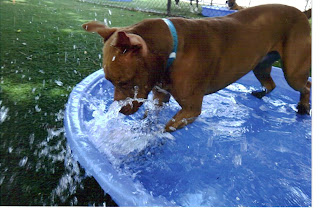 I just realized I have no pictures of our Knotty Cat in her new home so you'll just have to suffer with pictures of Wilbur during his two week stay at Doggy Day Care. 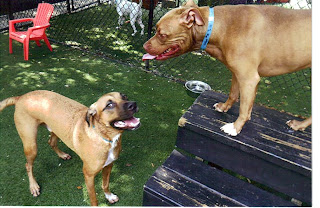 King of the mountain.

Wilbur does this at every park.

Finally after two weeks apart, Hans, Wilbur, and I are together again aboard the Knotty Cat.

I picked Wilbur up the day after I arrived back at the boat, and the both of us picked Hans up at the airport on Saturday.

All I can say is, I'm surprised I'm not still frantically circling the airport in search of Delta Blue # 2 Arrivals in search of Hans, and I hate airports! I think I really hate Tampa International Airport the most.

I have no sense of direction and GPS can only help so much. But when one follows the signs to an airport and arrives at a fork in the road, one should be given more choices at said fork than, 'Short Term Parking' (on the left) and 'Car Rental Returns' on the right.

Like how about 'Departures' and 'Arrivals'??? Where the hell are they???

All I knew was, I wasn't looking to park, and I was not returning a rental car.

Of course I took the wrong fork and before I knew it I was exiting the airport and entering the Twilight Zone. Now, normally the voice on my GPS is that of a very calm English lady but even she became a bit hysterical at this turn of events and in addition to shouting 'Recalculating! Recalculating!' she implored me to 'Turn Left' Turn Left' ! even though that would have had me making a sharp turn into the guard rails of a major highway. Unfortunately our GPS is over four years old and it's very apparent that some major road work has been done in the area since then and our old girl couldn't handle it. I also became a bit hysterical and told her to shut the hell up but she wouldn't. We are no longer speaking to each other

I ended up pulling a very iffy U-Turn and zipped off once again toward the airport only this time I approached from the North instead of the South and I prayed the signage from this direction might be better.
It was not and I ended up in a short term parking garage. By now I had Hans on the phone and even though he was the one who'd suffered through an interminable flight across the pond with no knee room whatsoever, a huge line through customs that caused him to be late for a connecting flight, and then a missed flight in Atlanta because he couldn't print his boarding pass in France (where they'd originally tried to send him to Helsinki!), I was the one having a hissy fit. Poor Wilbur wondered why he had to be yanked out of Doggy Care Care where life is 'all about the pitty' only to find himself trapped in the back seat of a vehicle while his mama screamed at an invisible woman.
Thankfully as I shot out of the short term parking garage an attendant assured me I wasn't the first person this has happened to. She then pointed me in the right direction.

I finally found Hans (who by now probably wished he'd taken that damn flight to Helsinki), and for some reason he insisted on taking over the driver's seat. Little Miss Prissy Voice loved this and in a sweet cooing voice, talked him all the way home without a hitch. Bitch!

Hans was supposed to start work yesterday but the owner of the company, after leaving France for the USA, found herself stuck in Rome and would be arriving a day late. Something about a broken windshield wiper on the plane and there was no mechanic available with the proper training to fix it. I personally think that GPS's are trying to take over the world. I bet somewhere out there, a pilot is still wondering how the hell he ended up in Rome when he thought he had the plane pointed towards Atlanta.

I only hope he doesn't tell anyone that a strange voice told him where to go. 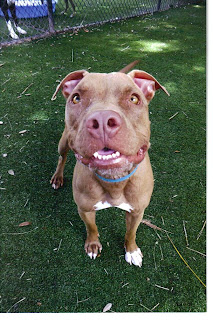 This little voice is begging me to take him back to his little friends at Day Care.
Posted by Laura and Hans at 9:01 AM