Making Friends and Helping Others 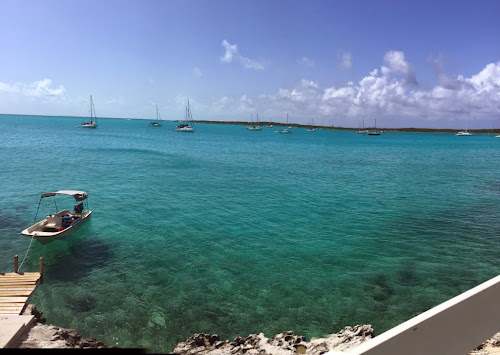 Blackpoint Settlement as seen from the Laundromat

Something we often hear about in our travels is how friendly and helpful the sailing community is. And it's true.

Back when we were in Warderick Wells, a couple we met in Marathon and crossed with over to the Bahamas, experienced a problem that left them without an engine. They really wanted to get south to Blackpoint Settlement (where there were more services available) which wasn't all that far away but, in order to get there they would need to be towed off their mooring and out of the Exuma Park. So, Hans and three other captains volunteered for duty and the next morning during an outgoing tide, Operation Dinghy Tow was a success. The biggest thing I regret about this trip (and I will kick myself forever) is that I chose the most inopportune moment to go below and wash my face. I came above deck with my iPhone in hand all ready to video this particular adventure and realized with dismay that they'd already passed (within feet) of the Knotty Cat and were way out to the red and green channel markers and also out of camera range. A total of four dinghies, two on each side, had lashed onto the engine-less boat and after a breath taking moment when one of the mooring lines got stuck, they were on their way. Once past the markers I could see the dinghies falling off as the crippled boat unfurled its jib and was on its way.

Maybe it's a good thing I didn't see what was taking place because Hans arrived back to our boat with the dinghy ankle deep with water. Being lashed to the big boat meant that the waves of water that slapped up between it and our dinghy ended up in, well... our dinghy.

Our friends sailed into and achored at Blackpoint and later in the week during the big blow, where we saw 46 knot winds in Staniel Cay; they saw 70 knots of sustained winds. While stuck in Blackpoint, the captain, with a portable generator donated by another one of our 'crossing friends' worked on his engine issue while his wife volunteered at the local school. In Blackpoint (the Staniel Cay landing strip is closed) he had parts flown in, we had a new wind generator flown in (a drama unto itself and a future post), and we just heard another one of our friends needs to get a new raw water pump flown in.

Also, back when we were in Warderick Wells, a call went out on the VHF for anyone with veterinarian experience and we all tuned in. A yorkie (the most fearsome creature Wilbur has ever encountered) had exhibited some unusual tummy troubles to the point of throwing up bile. The VHF crackled with excitement as we all jumped in. A fellow cruiser (who had just had his wife flown back to the states due to a severe kidney infection and was awaiting a weather-window to sail his boat back to the states to join her) zipped about the mooring field collecting donations, with ours being canned pumpkin. But alas, the little shit yorkie turned up its nose to everything donated (except for some coconut yogurt) and while it ate some boiled chicken, it spit out the rice that had been cooked with it.

When we later departed the mooring field and passed the boat with the yorkie in distress, I was not surprised for one moment when the little stinker (looking suspiciously healthy) erupted from below deck, ran to the bow, and nearly turned inside out barking at Wilbur. I've no doubt it then went into acute distress and another emergency run of the mooring field in search of more tasty treats ensued.

We were in Warderick Wells for barely a week but it surely seems like most of the help meted out during this trip occurred there. And Wilbur, too, did his best to be a good canine citizen.

The day we entered Warderick I was amazed when we slid past a boat that had a dog that was approximately the same size as Wilbur. I was even more amazed when I realized it looked like a pit bull. This dog was playing a polite game of fetch off a dinghy lashed behind its boat and Wilbur was quite vocal upon witnessing this wonderful event. 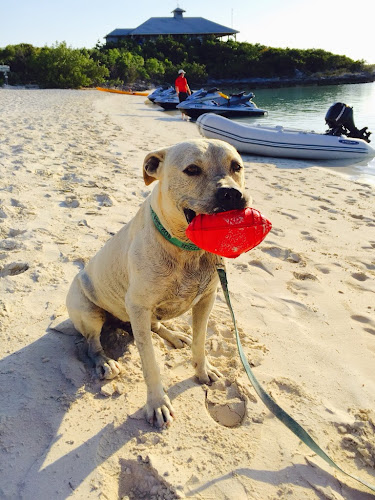 Ryder, with what is now Wilbur's toy.

At the shelter, Ryder's breed was vaguely referred to as a lab/boxer mix but his family, as well as anyone with two bad eyes, can see that Ryder is definitely a pit bull (heavy on the pit) mix. After a couple of days we finally arranged for Wilbur and Ryder to meet at the beach. I'd warned Ryder's people that Wilbur is maybe just a little greedy when it comes to toys. No problem they assured me, Ryder is a generous soul. Hans and I let Wilbur tow us ashore in our dinghy where he skidded to a stop beside an astonished Ryder, stood stock still while Ryder sniffed his nether regions, and then leaped like a mountain goat up onto some very unforgiving coral. Dare I mention Wilbur did all of this in his pink polka dot life jacket? As per Wilbur's usual behavior, he insisted on first marking his territory before socializing and then promptly set forth to terrorize Ryder and his people. Ryder had brought a tantalizingly bright red, squeaky football to this play date and was happily chomping it in his jaws when Wilbur, sensing trouble, came to the rescue, snatched the football away, and immediately performed an emergency sqeakerectomy right there on the beach. In a further effort to be a hero, Wilbur clung to the now silent but possibly still dangerous football and ran away every time Ryder approached to ask if he couldn't please have his toy back.

Long story short, Wilbur now has a non-squeaking red football on board, and surprisingly Ryder's people are still in touch with us. 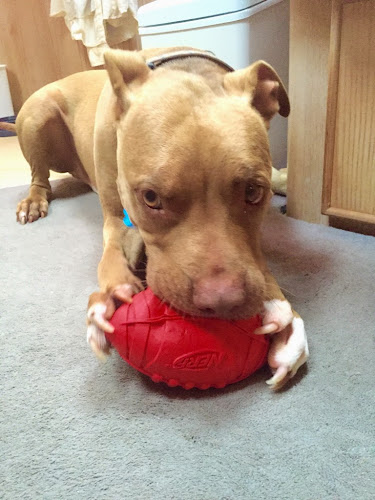 Wilbur tries to keep the squeaker-less football from hurting us.

In a spirit of continued generosity, Wilbur donated his very well used potty patch to Ryder who apparently has potty issues and prefers to 'go' ashore. We've been informed that so far even though the patch stinks of Wilbur, Ryder has shown no desire to mark it for himself. 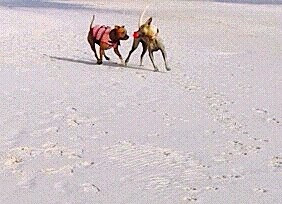 Posted with Blogsy
Posted by Laura and Hans at 2:13 PM