We flew to the BVI's with two other couples in order to charter a boat for a week. The other couples were friends of Hans' and I'd only met them once during a 'planning' meeting. The day we were to arrive at the charter boat, Hans and I missed a puddle jumper flight and we ended up spending the night in Puerto Rico instead. This cut out a full day on the boat and since this was a much deserved vacation for both of us (I was holding down two jobs at the time), the stress level was beginning to mount. But we finally got there and after a very quick briefing, we were off.

I don't know where the break down in communication occurred but somewhere along the line I'd been given the impression that coffee (my life's blood at that time) would be hot and ready on board early the next morning. So upon arising, I took my time getting a shower, washing my hair, and applying makeup (an obvious charterer!). But, alas, I found the galley lacking not only crew, but coffee. "No problem," I said. I found a large aluminum percolator and immediately set to work. I'd filled its huge basket with coffee, poured nearly a gallon of bottled water into its reservoir, and only then did I discover that the glass percolating bulb was missing and was nowhere to be found. That's just about the time my brain told me if it didn't get a caffeine infusion pretty soon there might be a problem. Poor Hans stepped in and tried to help. His engineering brain so wanted to solve this unsolvable problem and then the wife who'd promised early morning coffee came tripping aboard holding a single steaming cup of carry-out. While I zeroed in on exactly where she'd come upon such goodness, Hans was still scratching his head and trying to come up with some kind of McGyver-like fix. I then told him where ready-made coffee could be had and would he please go get me some (I honestly can't remember why I didn't make this trek myself). His answer was to continue to try to re-engineer the percolator and that's when I came unglued and screamed (yes, I admit, I screamed) "Just go get me a cup of f*cking coffee!"

He did, and luckily we later found a jar of instant coffee on board and I did my best to behave for the rest of the trip. Except for the morning Hans took a huge gulp from my orange juice and loudly exclaimed in amazement for everyone to hear, "There's vodka in this!"

That was the first and last time we sailed with those people.

Crazy weather, a severe lack of internet service, and a pit bull who in addition to adopting a nation of ticks and (if we dare go ashore without him) thinks our guest berth is potty central, has made this particular trip to the Bahamas a bit more challenging than expected. I had just finished mentioning this to Hans when I realized I was missing a vital piece to my AeroPress Coffee Maker. Well, that was just the straw that broke the camel's back.

I love my AeroPress. All it requires is hot water, a paper filter, and any grind coffee you choose. What I especially like is that clean up is a breeze. Gone are the days of using way too much water to clean our French Press (I know I can use sea water for the initial rinse but maybe I don't feel like it). Every morning I fire up our propane stove, heat water in my ancient percolator which takes very little time and its then poured into the AeroPress and voila, Coffee! Except for yesterday morning when I realized my little hockey-puck-size sieve which houses the tiny paper filter had gone missing. I don't know why but I just knew it had to have ended up in the previous day's garbage which was happily fermenting in the Blackpoint Settlement dumpster.

I'm pretty sure the charter cruise of 2007 resonated deeply in Hans' psyche and in fear of reliving it, he set out to make things right.

After a breakfast with French Press coffee and a trip to the beach in order to exhaust and empty the dog (whom we then left on the boat), we headed ashore. While I hooked up to the internet Hans headed over to the dumpster (I was kind enough to provide rubber gloves). A good while later I was sitting on a broken plastic lawn chair at a lopsided table when Hans finally showed up where he then gallantly placed my missing AeroPress piece on the table. 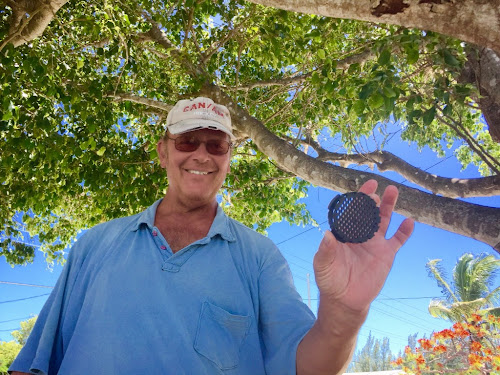 Yes, it was indeed a Happy Mother's Day for both of us.

Posted with Blogsy
Posted by Laura and Hans at 2:25 PM